I have just returned from a week in Melbourne, visiting my daughter and her family. Last year my two year old granddaughter Eloise introduced me to one of her favourite performers, Dan Zanes. She had attended two of his concerts and when staying for Christmas shared her DVD and CDs of this American singer. I was hooked and said that if he ever visits again, count me in. 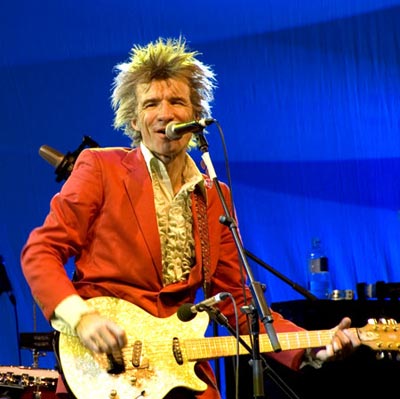 This year Dan Zanes and his band of friends were invited back to Melbourne for the International Arts Festival. So down the Hume Highway I journeyed to attend two concerts. We actually had a bonus as Dan and his friends opened the festival with a free evening concert and we happened to see their sound check for this as well.

In a previous musical guise, Dan Zanes fronted The Del Fuegos, a rock band based in Boston in the 1980s. The music Dan now plays, unashamedly owes much to his time with this band. The rough edged vibrancy, memorable guitar riffs, driving rhythms and exuberance are still present. Watch some videos of the band that lurk about in cyberspace and you will also realize that the delightfully flamboyant, rock and roll moves that Dan cultivated with the Del Fuegos continue to play an important part in his performances today. We were even treated in the final Sunday concert to some impromptu “back of the head” guitar playing.

Dan and his very talented and versatile, musical friends have stirred up a wonderful concoction of musical styles to create music that is exuberant, instantly catchy, fun, passionate and definitely for all ages. There is no cringe factor here for anyone. The music is what it is all about and it is about life, its wonders and the responsibilty that travels with this realization. The freshness of Dan’s music is enhanced by an acknowledged indebtedness to a rich musical tradition. The music belongs to everyone, it’s the music of the people. As if to underscore this, Dan and his band started each show making their way to the stage via the audience, playing and singing acoustically. They finished their performances the same way, returning into the audience. For the final Sunday show, the windswept, pepper grey haired Dan was dressed in a “leader of the band” red coat, ruffled white shirt and white pants.

Dan Zanes and his band obviously enjoy what they do. During the last concert Dan expressed his thrill at looking down from the stage and seeing the diversity of his audience involved through their lively singing and dancing. The band’s enthusiasm is contageous. They do not patronize their younger audience. Everyone is on an equal footing at these concerts. Where else

can you find a band that moves so effortlessly from songs as diverse as Pay Me My Money Down, Walkin’ The Dog, Loch Lomond, Cape Cod Girls and Dan’s delightful, rockin’ originals like All Around The Kitchen? The marvellous repertoire of songs works on a number of levels. It is feel good, thoughtful music and you respond accordingly. 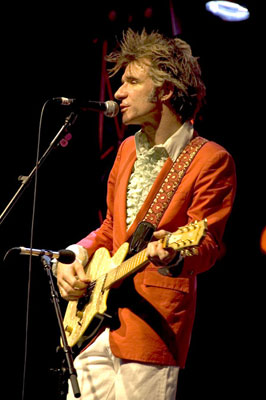 The magic of music in one’s life is the message, if there is one. At both concerts Dan made mention of the troubled times we are living in and the need to sing an anti-war song at each concert. His was a rousing version of Down By the River Side.

In the opening concert to the festival, Dan more than pleasantly surprised me by singing Boonaroo, a great song by the late Australian songwriter Don Henderson. The song was written during the Vietnam War. It tells of the ban which merchant sailors placed on the supply ship Boonaroo because of its cargo of munitions bound for the war zone. I spoke to Dan after the final Sunday concert and thanked him for singing the song. Even though I was familiar with the song, as far as I can remember, this was the first time I have ever heard anyone sing the song in live performance. He was surprised at this. Dan learnt the song from the Vietnam Songbook, compiled by Barbara Dane and Irwin Silber and published in 1969. He first sang the song in 2003 at a concert celebrating protest songs, most of those performed coming from Dane and Silber’s book. He said he only realized on the flight to Australia that this year marked the fortieth anniversary of the Boonaroo ban. 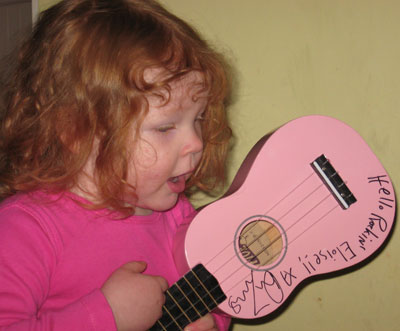 Needless to say, my family had a wonderful time at the concerts and were left with lasting memories. Little Eloise took her pink ukulele to the last concert and strummed, sang and rocked along to the music. She also got Dan to autograph her ukulele. He wrote: “Hello Rockin’ Eloise!! xx Dan Zanes” She was thrilled.

After the Saturday morning concert I overheard a grandmother praising Dan for not only getting her grandchild moving and singing to the music but her husband as well. With an appreciative smile, Zanes promptly responded:
“Mission acomplished!”

[Thanks to the Durrant Family for the  photos]