Last night Warragamba Dam, a long provider of most of Sydney’s domestic water, finally reached its capacity. This resulted in its flood gates opening and spilling the excess water. It is fourteen years since this last occurred. This excess water flows into a river which starts with the name Nepean and along the way becomes the Hawkesbury.

I went down this afternoon to the Nepean River to see some of the effects of this spill. The river was much wider than usual and moving along at a steady pace. As if reminding one of the cause of all this, the rain maintained a light drizzle while I was there. Although the water level had dropped a little during the day, sections of the river bank where I walked will most likely be well under water tomorrow. 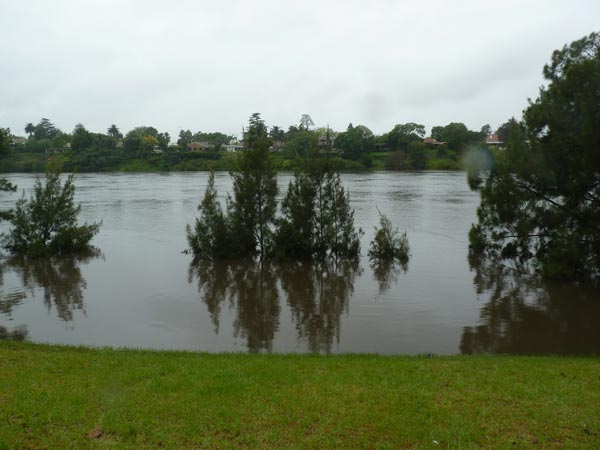 As I watched from the river bank I was reminded of the first time I visited Warragamba Dam, exactly fifty years ago. During a school holiday in 1962, a friend and I caught an early train from Sydney to Penrith. From there we began walking to the newly built Warragamba Dam, a distance of some twenty kilometres. The largest concrete dam in Australia, it was officially opened in October 1960. Built at a narrow gorge on the Warragamba River, it took twelve years to construct.

A memorable part of my 1962 visit to the dam was walking across the narrow suspension bridge, high above the gorge. The dam’s enormity and significance were fully appreciated from that vantage point. 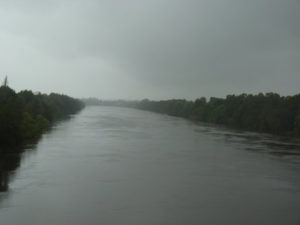