On the afternoon of 23 August this year (2005) I went for a long walk in the bush. That morning I was deeply saddened to hear of the passing of Denis Kevans, the self-described ‘Poet Lorikeet’. Denis was known for his poetry, his songs, his performances, his scholarship and his passion for the environment. He was also a friend. 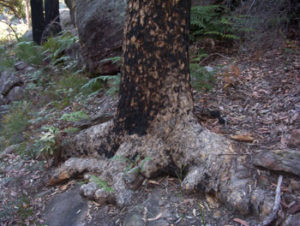 Often when I go for walks in the bush near my home on the lower Blue Mountains, I think of Denis, his genuine love of and respect for the natural environment, and his creative response to it. And there are so many fine ’stone from stone, and tree from tree, or is it stone from tree’ examples I have found over the years out there in the bush.

I first heard the name Denis Kevans when I purchased Gary Shearston’s long-playing record Australian Broadside back in 1965. The Roar of the Crowd was one of the songs on this album. It quickly became a favourite. The strong, opening lines, with their striking imagery, caught my attention and imagination

I heard the roar of the wind, boys, in the mighty, green-shirt pines.
As if the trees were blazing, like a gas-fire in the mines

This powerful song was composed by Denis. Over the years the song has caused me to reflect on the idea of conformity, the powerful dynamic of a group with all its associated emotions, the place of shared destiny and individual responsibility and choice.

I first met Denis in the mid 1980’s when he came to live in the Blue Mountains. He heard me performing my song Mr Murphy, about a former resident of Blackheath. He liked the song very much and even signed my copy of one of his poetry books to Mr Murphy as well as myself.

Over the years he was always offering words of genuine praise, suggestions and encouragement for my songwriting. I fondly remember his excited telephone call early one Sunday morning telling me ‘to turn the radio on now because Macca is playing your song’. ‘Macca’ refers to Ian McNamara who hosts the popular Australia All Over radio programme each Sunday morning.

‘Hope you are writing and letting it flow’ was a common sentiment Denis expressed to me. I heard that he told others about my songs. He was not afraid to offer constructive criticism when he felt it was warranted. One of my early songs about the Blue Mountains’ road builder William Cox worried him. He felt it gave undue recognition to Cox rather than to the real road builders, the convicts. 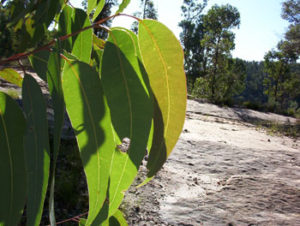 Around 1988 I saw him perform some of his poems during a lunchtime concert in Martin Place, Sydney. He gave an impressive performance, despite one of his legs constantly shaking during the performance. His voice, enhanced by the PA, soared confidently above the constant drone of the lunchtime hubbub. I felt a definite elation at having experienced one individual’s ability and readiness to express his opinions in such a creative, forthright and often humorous way.

In 1992 when I released my six song cassette Journey’s End, Denis kindly wrote a very favourable review. It was later published in our local paper and the NSW Folk Federation’s Cornstalk magazine.

The many times we met at folk clubs, festivals and concerts, he would usually get me aside and talk about songs and songwriting. Sometimes our meeting would result in a letter or note on a scrap of paper, the following week in the post. In one letter he described the creative process in the following way:

I just pick the topics that pick themselves and often I put the theme in an unusual or unexpected framework. I am following my own ’stream under the stream’, and I know this is best for creativity.

When I can detach from the daily horror stories in the media, I start to get more songs beginning, at least. Some of them take many years ‘ and I try not to rush them because that seems to scare them away ‘and I wait for an occasion that will best suit the song, or idea, and try to write the song for that. Unless it’s a rush job’

My idea is that being creative is the ability to do nothing and to release all anxiety about ‘producing’ or ‘production’ and just go with the flow of the day, listening to music that you like and watching the world around you and not worrying about producing anything another way with me is ’small goals and limited objectives’ this has been invaluable.

In July 1997 I took Denis up on his kind offer to explore some of the bushland behind his home at Wentworth Falls. Many of his Blue Mountain poems have been inspired in this area

I caught an early afternoon train and walked from the station to Denis’s place. On arrival I found there was no one at home. I noticed a crumpled piece of paper hanging on a tree in the front garden. The paper had been fixed there by pushing one of the tree branches through it. A message was written on the paper: Back in 30. Some years later I was reminded of this note when reading about the practice of Korean poets who hang their poetry on trees in the street to sell them.

Stuck on a tree
Addressed to me
‘Back in 30′
Poetry?

When Denis duly arrived home I realised that his health was not the best. However, after a cup of tea, which he liberally sweetened with honey, he insisted on taking me for a walk in the valley behind his home. 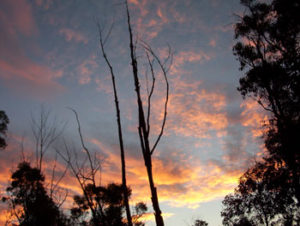 Later, on the train trip down the Mountains as night fast approached, I scribbled down some thoughts about my afternoon with Denis and some of the things I had seen. These notes later formed the words to a song I called With The Poet Lorikeet. I sent the words to Denis as a form of appreciation for the time I had spent with him.

Early last year I was looking in some of my writing folders and came across With The Poet Lorikeet. With some slight changes to the lyric, I set it to a new tune, recorded it and left a copy for Denis. A few days later I received a letter from him. It concluded as follows:

I can’t solve the world’s problems, only try to write a few poems and songs. As my old mate said: ‘Denis we are grains of sand’.
Hope we enjoy another day, Mate, some time, and talk about the bush, and what we see in it, together, thanks so much, Jim.

We never did get to enjoy another day in the bush together. But I am so grateful for the time I did have with Denis, his genuine friendship and the memories, songs and poems he left behind.